Where are Singaporeans living in America? 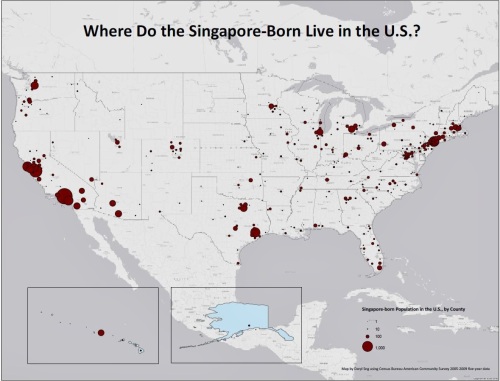 Former political counsellor to the Singapore Embassy Daryl Sng created a post on his blog about where Singaporeans are residing in the United States, using ArcGIS, a geographic information system software. He uses county-level data from the Census Bureau’s American Community Survey, 2005-2009, which shows some 26,754 people who claim Singapore as their place of birth. Of course, that includes children of expatriates born in Singapore and Singaporeans who have given up their citizenship. Sng also states that the new 2008-2012 census data was recently released, showing some 29,173 people who indicate Singapore as their place of birth living in the United States.

I think the most interesting parts of the data are: who are the random specks living in Montana and South Dakota (only dot in the entire state)?