The changing face of the New York Time’s webpage 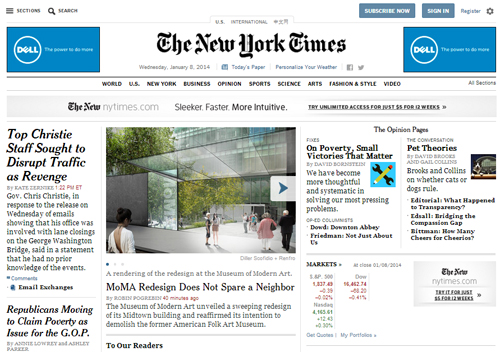 This week, The New York Times will be launching a redesign of its website. The updated version of NYTimes.com, the paper promises in a promo, will be “sleeker,” “faster,” “more intuitive,” and “enhanced” than its forebears*. “We’ve streamlined our article pages,” the paper explains, “and created a more responsive interface with faster load times.”

Another thing that’s being streamlined? The site’s homepage. The front door to the country’s paper of record has been remodeled, with a new emphasis on interstitial spaces and sleek blacks and whites. Above, you can see that evolution in action—via a GIF featuring screen-captures of homepages dating from the past to the present: the years 2001, 2004, 2007, 2012, and the soon-to-come version of 2014.