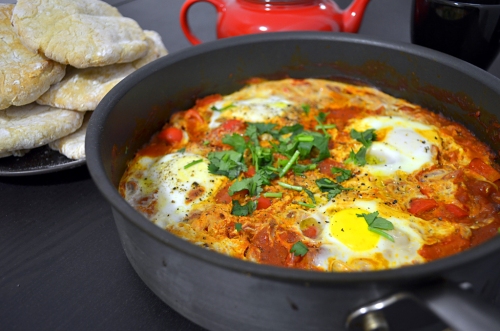 I made shakshouka, but this post isn’t about the shakshouka. In fact, it’s about the pita in the background, which I made.

Did you know how cheap it is to make your own pita? Had I known how cheap it was, I’d never have bought those commercial pita. Plus, home-made ones are so much fluffier! Seriously, the initial crunch and then the yield of the white, soft fluffy interior is so luxurious, I could sleep in it.

Let me break down the cost it takes to make pita:

This is the recipe I used, from allrecipes.com.

I didn’t have shortening, so I altered the recipe and used somewhere between 1/8 and 1/4 cup of olive oil instead. I ended up using all 3.5 cups of flour. The trick to fluffy pita is to really just give them time to rise. Total time taken is about 1 hour 20 – 30 minutes.

Of course I understand that not everybody has the luxury of time to splurge on making pita, when the convenience of just buying them from the store appeals so much more to the time-pressed. But I assure, that oh-so-soft fluffiness of home-made pita is worth it, the lack of preservatives in it makes it healthier too.

So I made a batch of 12, I’m not going to be able to finish all of it in one sitting. I figure it’ll keep fairly well in the fridge in a ziploc bag until when I need it. Now if you’ll excuse me, I’ve got some fluffy pitas to roll around in.