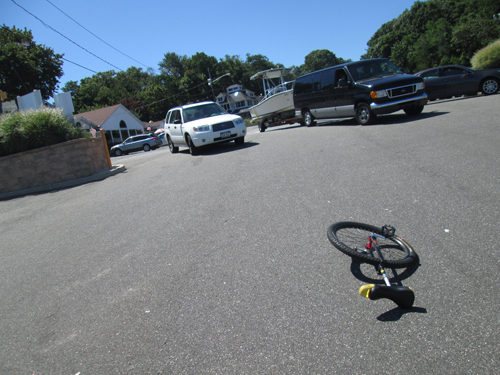 It’s been a while since I last did  a long-distance unicycle ride, but I decided to go visit my friend on Long Island, and that’d give me an excuse to do some long-distance. The route would have been about 67 km/41 miles. I was to start in Queens and meet him at the Three Village Shopping Center just north of Stony Brook University. Because WordPress.com does not allow embeddable live maps, here’s a picture of the route. Scroll to the bottom to skip to the stats.

You’ll come to realise that the trip stopped at 58km, that’s because I got a flat tire and had to stop. And I was so close! I had about 9km to go and I was forced to stop.

My rations for the trip: GPS, a book for the train journey back (I wasn’t going to ride all that distance back!), extra batteries for the GPS, my wallet and phone, MP3 player, 2 Snickers bars, 2 litres of water, some nuts, potato salad, and a Nintendo 3DS to see how many steps the pedometer in the 3DS registers the journey as.

I started out in Queens, since I figured if I were going to hang out with my friend, I probably shouldn’t be completely pooped out by the time I arrive. Had I left from my apartment in Brooklyn instead of Queens, that would have added an additional 13km to the journey, making it 80km total, which would have wiped me out. 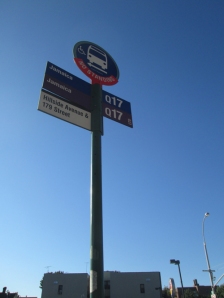 Queens roads are the absolutely terrible; potholes, roads that are not level, cracks, and glass shards. I was worried my legs would be over-taxed early into the journey. I unicycled past lampposts that was utterly covered in staples and nails, and a really cute barn-like pit stop. This was all still in Queens.

My first stop outside of Queens was this town called East Williston; it has a pretty church and a pretty train station. That’s about it. The rest of the journey alternated between boring suburban towns, some fairly nice neighbourhoods with ritzy residences and industrial towns.

I ended up on the expressway and panicked a little — I thought I was lost and was not supposed to be on it. Luckily, when I saw some other bicyclists on it too, I relaxed. Other highlights of the trip include numerous fresh produce farms and when I made a wrong turn and ended up on King’s Park Wharf.

The journey was on the overall not too hard, until the last leg after I got lost, where it was killer hills, rocky roads and more killer hills. In fact, that was probably why I had the puncture, from going downhill a little too quickly on a rocky road on a killer hill.

Here are some stats summing up the entire trip.

I unicycled into Long Island and all I came back with is a weird tanline.