To build a fortress

Last night, I was practicing being supine on the floor in my bedroom because the weather was really hot, and lying down seemed like a good idea. Despite having broken my glasses and being unable to see much, I still managed to see a mouse suddenly dart out from behind the dressers to the radiator and then back again.

This commenced an hour-long crusade where I attempted to bop the mouse on its head with a shoe.

I don’t know why I thought I could do it. Firstly, I could barely see. Secondly, trying to bop a mouse on its head with a shoe hardly seems like a very efficient method of getting rid of vermin. But it was already midnight, and the myth of a 24-hour convenience store where I could buy traps does not exist in my neighbourhood. Shoe it is then.

I wiggled the extension cord that ran behind my dressers, and the mouse ran out from the opposite side.

I pulled and moved stuff out from under my bed, jostled things around, wiggled more wires, and it darted out again.

More whapping, more missing. There are now black scuff marks from the shoe on the door and the post. Hopefully they will come off. I also hope the neighbours don’t think too badly of me; I’m sure they would have done the same were they in my circumstance.

Eventually it crawled back into the radiator, where I could see it nestled between the coils. For a brief, mad, midsummer’s moment, I almost wished the radiator would turn on and kill the mouse by heat. So much vehemence. I blame the heat.

But then I realise sane people probably get rid of mice in their apartment with traps. So, to prevent the mouse from escaping to a place out of my knowledge, I proceeded to erect a fortress around the radiator, hoping to trap it in so that I may buy some time to buy some traps tomorrow. Here’s a schematic of the situation. 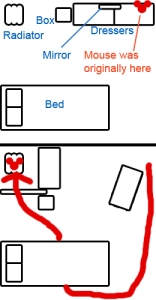 The image above shows the path the mouse took, and what I did to trap the mouse. Such tactics! Such strategy! Ballads shall be sung in my honour and my excellent exploits shall ring for all posterity.

The mouse wasn’t in the radiator the next morning when I woke up. Screw the fortress. I left the house to go buy some traps.