A Pinch of Me 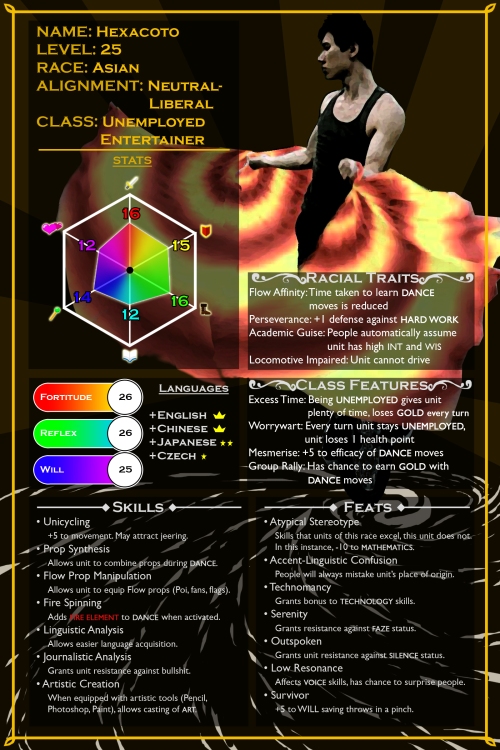 The Daily Post at wordpress.com posted a weekly writing challenge, titled A Pinch of Me. There, they asked bloggers to write a recipe that described who they are.

However, I think recipes are too boring (even though I cook a lot) and decided to come up with something geekier: a Dungeons and Dragons character sheet!

I generated my D&D stats with this site: What Kind of Dungeons and Dragons Character Would You Be?, courtesy of Easydamus.

It was fun time-waster, doing this. When I play table-top, I seldom follow official rules, and I had to look up some of the terms and stats a little while making this. 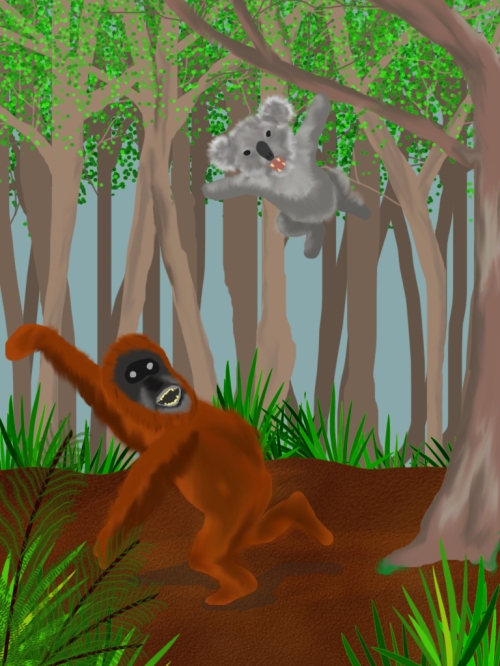 Last night, I was chatting with someone who was doing a road trip through the Southern United States. He was in New Orleans, I think. As a joke, I said to him, “Watch out for the drop bears.” Which makes no sense because drop bears are from Australia anyway.

It turns out someone else also said to him, “Watch out for skunk apes.” That makes it two people who warned my friend of cryptids on his travels.

I was thinking, why can’t there be drop bears in New Orleans? If my friend could be a tourist there, surely drop bears can too.

Also, what are skunk apes? Looking them up, it is a bipedal ape-like creature that is incredibly smelly. A woman who supposedly sighted one believed it to be an escaped orang utan.

But unlike the skunk ape, drop bears are not cryptids, in that they are completely fictitious, created to tease tourists coming into Australia. According to Wikipedia, “various methods suggested to deter drop bear attacks include placing forks in the hair, having Vegemite or toothpaste spread behind the ears or in the armpits, urinating on yourself, and only speaking English in an Australian accent.”

I kind of really like the drop bear I created. I liked it so much I made it into a logo.