With a #rolabola, even fried chicken can be part of a balanced diet! #cibomatto #knowyourchicken #circus

Sometimes, you just gotta lighten up and take a break and create pointless, stupid stuff. I had been on the train, on my phone, extracting bridges from songs for future use on short video clips like these when suddenly the caption “Fried chicken can be part of a balanced diet too!” popped into my head. And as a fan of Cibo Matto, the idea of for this video clip came to fruition.

And I realise I’m no stranger to creating stupid things to make sense of life.

#unicycle #jousting is serious business; you need to be appropriately dressed for it. (I think I made this back in 2009) #carminaburana #papercraft

I probably made this back in 2008 or 2009. There were a bunch of other clips from that same filming session that I am not releasing because they’re very cringeworthy.

As commented on by Deadspin,

I don’t have any information or context to provide to help you make sense of how this video came to be. The best I can do is this message board thread that has live play-by-play of the action, but it isn’t necessarily all that helpful. (“No one in the crowd. Including us, know what the fucks going on. Before you start shouting ‘staged’. I can confirm they arnt. The fights are SO bad that they couldn’t possibly been choreographed.”) Anyway, I think that’s for the best. You should be able to enjoy Spider-Man beating the absolute shit out of Batman and Robin without having to think about what you’re watching.

At least the Spiderman retains his cocky nature. The Batman and Robin were just so… underwhelming. Especially Batman. He seems underfed. Somebody give that man a burger.

I’d rather take Batusi Batman at this point.

Something interesting in Newark, New Jersey.

On a whim, I took one of those online colour tests challenging one to see how well one can discriminate colour hues. This is what I got: 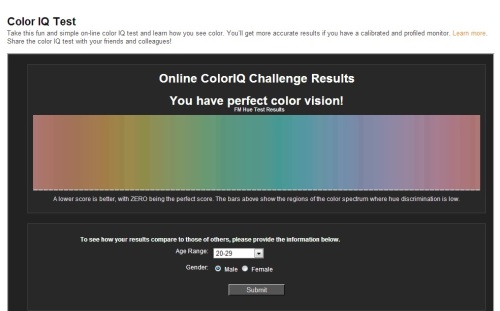 However, when I submitted my score, age, and gender to see how well I fared against those in my gender and age group, this is what they reported:

How does one get a score of -332? Does that mean a better-than-perfect colour acuity? Do they perhaps see more hues than human can? Maybe they’re secretly mantis shrimps.

A University of Lagos post graduate student, Chibuihem Amalaha, from Imo State has used science to prove that gay marriage is improper among other breakthroughs.

I have taken the liberty of summing up his scientific experiments showing that gay marriage is wrong.

One can only imagine the countless hours he spent, sitting in a lab, trying to get magnets to attract and repel each other, rubbing biros on his head trying to attract paper, and observing chickens fornicate.

Amalaha concludes, “So these are the principles I have used to prove gay marriage wrong in physics, chemistry, biology, mathematics and by the grace of God I am the only one that has proved this in the whole world.”

Amalaha’s other achievements also include that mathematical number Pi is not 22 over 7, and proving “that watching television in the dark impacts negatively on one’s eyes and by God’s grace, I was the first person to use scientific instruments to prove it in the whole world.”

In today’s weird post of the day, I bring to you: Male Ground Swimming Freestyle.

Following this, we have Ski Jump – Pairs. with the American team coming in fourth.

Finally, we finish off with a little bit of horse racing.

I was making some cabbage stir-fry, and as I cut open the purple cabbage, lo and behold! What seems to be the Majora’s Mask staring back at me.

What does it all mean?

It seems I have a penchant for really badly animated videos set to popular culture, but I find this rather funny.

I have no idea why I’m so addicted to watching this, but this is べジタリズム (bejita-rizumu/Vegetable Rhythm) performed by TEMPURA KIDZ. The song was commissioned by national broadcasting channel, NHK, for a children’s show, Minna no Uta. The song is meant to promote eating vegetables, which is also what the song is about, and that explains why the kids are dressed with vegetable headdresses.

One of the four dancers is a boy! It’s the purple one, whose stage name is P-Chan.

But seriously they’re all really good dancers. I was looking at their footwork and hands, and the gestures and movements are all very clean, crisp and well-executed.

This is going to stick in my head for a while.

Timmy the Grape was always under a lot of stress, so much so that one day he turned into wine and cracked under all that pressure.

This is the last of my illustrated short stories for now. I can’t believe this took me 12.5 hours to make from start to finish. Then again, I had planned to draw this for nearly over a year now, and now that I’ve all the time in the world (ahem) there’s no reason for me not to do it.